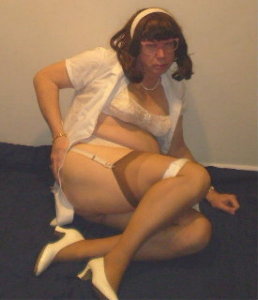 mostly from the LA times:

Bettie Page, the brunette pinup queen with a shoulder-length pageboy hairdo and kitschy bangs whose saucy photos helped usher in the sexual revolution of the 1960s, has died. She was 85. 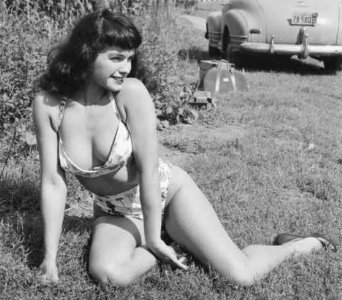 Page, whose later life was marked by depression, violent mood swings and several years in a state mental institution, died Thursday night at Kindred Hospital in Los Angeles [on slauson between Sepulveda and la cienega], where she had been on life support since suffering a heart attack Dec. 2, according to her agent, Mark Roesler.

A cult figure, Page was most famous for the estimated 20,000 4-by-5-inch black-and-white glossy photographs taken by amateur shutterbugs from 1949 to 1957. The photos showed her in high heels and bikinis or negligees, bondage apparel — or nothing at all.
Decades later, those images inspired biographies, comic books, fan clubs, websites, commercial products — Bettie Page playing cards, dress-up magnet sets, action figures, Zippo lighters, shot glasses — and, in 2005, a film about her life and times, “The Notorious Bettie Page.”

CMG Worldwide, the company that markets her image, had organized the event at its Sunset Boulevard penthouse offices. The idea was to get Page’s autograph on as many prints as possible, because demand for anything Page-related is soaring.

According to her agents at CMG, who control the images of Marilyn Monroe and Princess Diana, Page’s official website,
www.BettiePage.com, has received 588 million hits over the last five years. That’s cult status.

For the last 13 years, she’s been living in seclusion in various
Southern California communities. Nearly five decades after the last photos of her appeared in magazines like Chicks and Chuckles, Page is finally earning a respectable income for her work.

She was born Bettie Mae Page in Jackson, Tenn., 105 miles southwest of Nashville. She was the oldest girl among Roy and Edna Page’s six children. Roy, an auto mechanic, “molested all three of his daughters,” Page said.

Two weeks before her final exams in high school, her mother’s much younger lover “tried to pull me into his car. My mother nearly murdered me over that, then made me live with my father. So I couldn’t review my exam notes, which were at home.

“Because of that I got beat out of graduating valedictorian by a
quarter of a grade point and lost my dream of getting a scholarship to attend Vanderbilt University,” she said. “It was the worst disappointment of my life.”

After high school, Page earned a teaching credential. But her
teaching career was short-lived. “I couldn’t control my students, especially the boys,” she said.

She tried secretarial work and marriage. But by 1948 she was
divorced and had moved to New York and enrolled in acting classes.

Strolling the beach at Coney Island, Page crossed paths with
amateur photographer Jerry Tibbs, who introduced her to shutterbug clubs and suggested she wear bangs to help cover a slightly protruding forehead.

From the start, Page — whose measurements were 36-24-37 —
preferred the skimpy outfits she designed and sewed at home.

“I made all of my bikinis and most of my lingerie,” she said. Almost overnight, she became an underground sensation, attracting the attention of Irving Klaw and his sister, Paula, who operated a mail-order business specializing in cheesecake.

They also had her pose with whips, tied up in chairs and wrestling with other women in their underwear. To hear her tell it, Page was deeply depressed and aimless when she joined the Klaws. The bondage shots are the only part of her modeling career she regrets.

“I had lost my ambition and desire to succeed and better myself; I was adrift,” she said. “But I could make more money in a few hours modeling than I could earn in a week as a secretary. 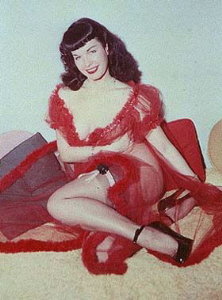 During her brief career, she became the obsession of thousands of men — a fact that mystifies her to this day: “I have no idea why I’m the only model who has had so much fame so long after quitting work.”

Writer Harlan Ellison suggested an answer: “There are certain women, even certain men, in whose look there is a certain aesthetic that hits a golden mean. Bettie is that. Marilyn is that.”

Richard Foster, one of her two biographers, called her “the
trendsetter in American sexuality.”

Playboy magazine founder Hugh [call me hef] Hefner put it another way. “Exactly what captures the imagination of people in terms of pop culture is something hard to define,” Hefner said. “But in Bettie’s case, I’d say it’s a combination of wholesome innocence and fetish-oriented poses that is at once retro and very modern.”

A motion picture, “The Notorious Bettie Page,” is scheduled for
release in April. Artist Olivia De Berardinis, whose work Page was autographing, expects to publish a book this year featuring her own idealized portraits of the woman once known as “The Queen of Curves” and “Dark Marilyn.” De Berardinis’ large paintings of Page sell for about $1,500 without Page’s signature.

At 35, Page quit modeling and moved to Florida, where she married a much younger man whose passions, she later learned, were watching television and eating hamburgers.

“Six weeks into the marriage, on New Year’s Eve 1959,” she recalled, “I wanted to go dancing with him at a nightclub. He said he’d rather get drunk with his brothers.”

Page charged out of the house in tears, wondering whether to divorce him.

In 1967, she married her third husband. After their divorce 11 years later, Page plunged into a depression marked by violent mood swings. She got into an argument with her landlady and attacked her with a knife. A judge found her innocent by reason of insanity but sentenced her to 10 years in a California mental institution.

She emerged from San Bernardino’s Patton State Hospital in 1992 to find that there was new interest in her story and her old poses.

A movie called “The Rocketeer” and the comic book that inspired it contained a Bettie Page-esque character, setting off the revival, among women as well as men, that continues unabated.

Still, she shunned the public eye, rarely venturing out even with
trusted friends. She spent most of her final years in a one-bedroom apartment, reading, listening to country tunes, watching westerns on television, catching up on diet and exercise regimens or sometimes perusing secondhand clothing stores. [lovely!]

Occasionally, however, Page was persuaded to visit the Sunset Boulevard penthouse offices of her agents at CMG Worldwide to autograph pinups of herself in the post-World War II years of her prime. The agency controls her image and those of Marilyn Monroe and Princess Diana, among others.

But a few weeks [years] ago, with confidant and CMG executive Richard Bann as her escort, she joined Hefner at the Playboy Mansion in Los Angeles for a special screening of “The Notorious Bettie Page.”

Page had one request for this story — that her face not be
photographed. But this much can be shared. Her face remains smooth and fresh, and one can still see the face of the young woman in the old. Her eyes, bright blue, still sparkle.

It was late afternoon when Page, visibly fatigued from all the
autographing, was presented with a special request. A man who had purchased 10 Bettie Page paintings wanted a personal dedication on a blank piece of paper.

“What do we know about this man?” she demanded to know. “Is he a nice guy? Would I love him like a brother?”

“His name is Jeffrey,” Hildalgo said. “He’s a nurse at San Quentin.” “All right then. Don’t wiggle the table, please,” Page said. “I want to get this just right.” “To Jeffrey,” she wrote. “Much love, Bettie Page.” 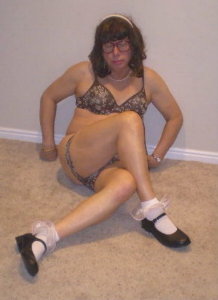